A fine mild day at Grosmont yesterday with Ian Pearson, Jon Bradley, Nigel Bill and (eventually) myself. After the usual washing up of lots of cups tea was served all round. There was quite a lot going on at the MPD with the steam crane in action lifting S15 No. 825's boiler from a well wagon into the area outside No3 road ready for its out of frames steam test next week. It certainly was of great interest to the visitors, as well as those walking the Rail Trail.

The Q6 was in the Running Shed on No 5 road waiting for a few minor repairs in preparation for its involvement with the NELPG diner on Saturday. The work was being organised by Barney, and two shed fitters, Dougie and Duncan, were given the job of dismantling and repacking both piston glands, while we were given the job of checking out the R/H cylinder non return valve which was leaking oil and steam. We set about by taking out some of the cylinder cladding bolts and removing the oil soaked insulation, finding out later that it wasn't necessary. This was because, when the non return valve was unscrewed from the bottom part (which is screwed into the top of the cylinder where it delivers oil), as Jon started to unscrew the top of the valve it sheared off. Looking at the piece that had come off it was evident that this had been broken for a long time, causing the highly visible steam leakage for many weeks, and it was not the result of any rough handling on our part! After consulting Barney we were told to see Barry Nesom, a volunteer machinist, to make a new bottom fitting with the broken one as a pattern. He did that within the hour. Our thanks to him and the other MPD staff involved for their help during the day. 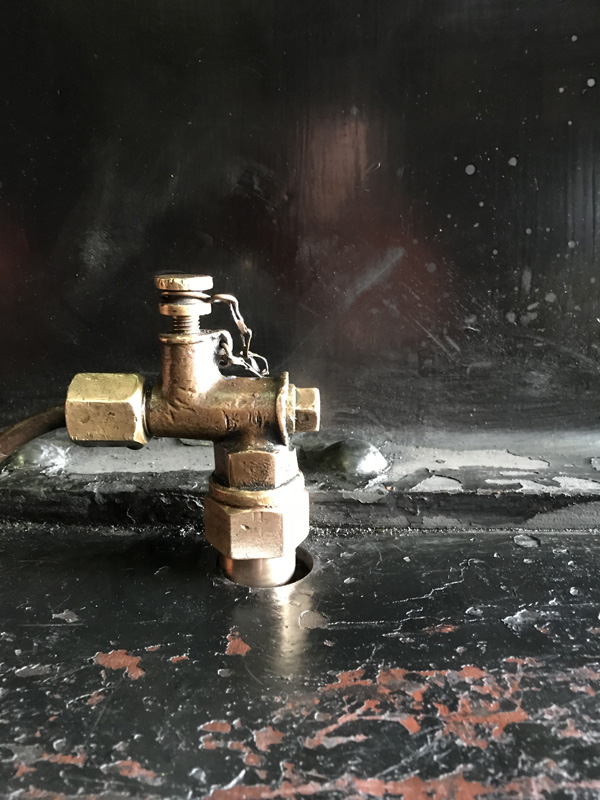 Lunch was had alfresco on the picnic benches outside Deviation Shed, possibly for the last time this year in view of the forecast for wintry weather this weekend. After lunch the non return valve was refitted, with the new bottom end into the cylinder (see photo). It was then primed with the bleed screw opened to check oil was flowing through. This was satisfactory, and the bleed screw tightened back down. The insulation was repacked and the cladding bolted back up. Other jobs completed were the tightening of the L/H trailing brass oil box feed pipe, and fitting of a thicker shim on the trailing L/H coupling rod bush. We then spent the rest of the day cleaning the running plate, oiling the axle boxes, and cleaning the inside motion. While Nigel Bill was cleaning round the lubricator, he found an outstanding defect - a loose lubricator fixing stud which he removed. It had a defective thread, so he obtained a new stud and fitted it. Our work was all signed off by the MPD.

Elsewhere, the J27 was working on the, now 4 coach, teak set diagram. With the removal of the S15 boiler for 825, the tender and frames for Hartland have gone onto No 8 road in its place. Once a successful boiler inspector steam test has been carried out on the boiler (provisionally planned for the end of next week), the S15 frames and tender will move out of No 7 road for the boiler to be dropped in. Lucie has also moved out of Deviation Shed, and is now in the Fitting Shop waiting to be rewheeled and the boiler to be completed. Putting it back together should then be a relatively quick job, but will it be ready for Santa steam heating duties at Pickering in time.......?

Nigel and I also had a walk up the headshunt to see what we thought was the Group's V2 tender underframe, which is a possible candidate to replace the existing K1 tender in due course. We also moved a bench from the side of the Running Shed up to the viewing area outside Deviation Shed. After restoration, this is planned to be a memorial bench for the late Alan Toomer.