Another busy few days with a few regulars on Monday night, PAT testing on Tuesday (all equipment passed) and the usual day time working party on Thursday.

After an early morning brew, Colin Smith and Allan Wilson continued cleaning the corners of the cab and tanks where the grease gathers. They were assisted by Tim Williamson who drilled out a broken cab hold-down bolt from the RH tank. Unfortunately in the process of knocking out the residue, the nut which had been welded to the inside of the tank came away. We’ll have to think about solutions to that problem. We are all too large to fit in the tanks these days. I got on with cleaning the wheels for painting. Arthur and John continued machining the spring hangers. Paul Mason continued with his magnum opus sorting through the spare nuts and bolts.

Tim and James Piercy removed and sketched the work required on the driving wheel horn stays.

We had a vice presidential visit from Ian Storey who had come to check progress, especially with the boiler.

John Midcalf came - and went after he realised that he had missed Ian. He returned later to borrow a headboard which he traced as a template. He’s making something – it’ll turn up in a raffle, you have been warned. Roy Marshall made an appearance just before lunch time.

Early afternoon we were visited by Neal Woods who came to check on progress.

Later in the afternoon we were visited by the police! 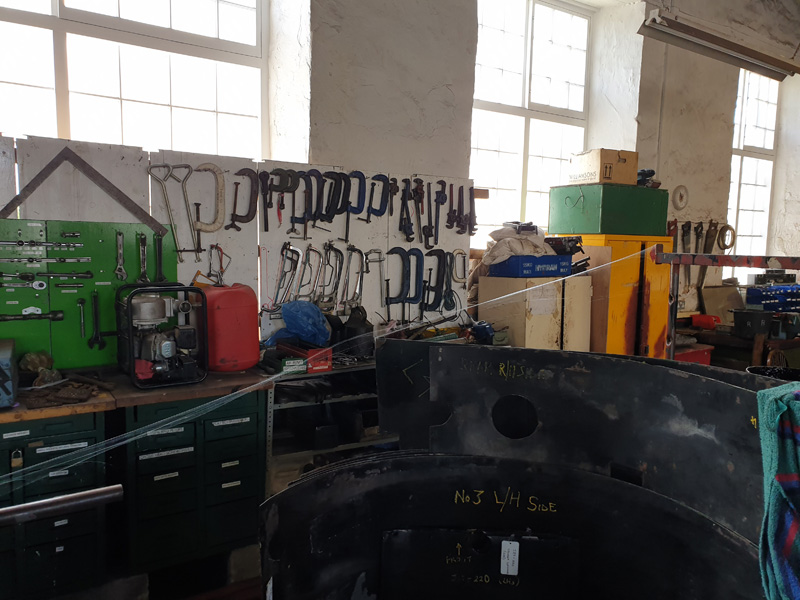