A lovely fine sunny, if cool, day at Grosmont yesterday, with Les Harper, Ian Pearson and myself. A welcome visit from Steve Hyman who is on the road to recovery following his accident on the Wensleydale Railway in August, and Mike Bloomfield joined us in the afternoon. At Deviation Shed, North Eastern Security Services arrived to service our roller shutter doors and repair the lifting mechanism of the No 6 Road door. Their first job was to get a cherrypicker round to the south side of Deviation Shed having arrived on a trailer towed by a short flatbed truck. After unloading near the coal storage area it was driven round to the southern end of Deviation Shed and work on the doors commenced. This included dropping the roller shutter door in its entirety onto the ground from height, which caused a rush to the site to make sure it was not an accident - it was not - and no-one had been injured - they had not! By 16.30 there was still a great deal of work to do, so they will be back today to complete the job.

The K1 was in traffic today leaving Pickering with the 09.25 train to Whitby, but unfortunately it had a broken R/H leading tender spring. The locomotive was changed at Grosmont for D7628 to continue to Whitby. The K1 was brought to the MPD for a spring change which was carried out by shed staff (see photo). Les Harper took the opportunity to make a start on cleaning in preparation for Saturday's NELPG Diner (see photo). While the K1 was having its tender spring changed, Les and Ian noticed that the L/ H piston rod looked quite dry but this could have been the result of a steam leak from the piston packing blowing the oil away. The brass oil box which feeds the piston rod was drained, the pipe run tweaked, and replenished with fresh oil. Oil was then noted dripping onto the piston rod. The K1 then departed Grosmont with the 13.30 train to Pickering. The Railway had hoped to run it again today, but it is now overdue its latest 28 day wash out, and Paul has stopped it to ensure it is available for the NELPG Diner on Saturday, which will be its last turn of the year. Immediately after its return to Grosmont on Saturday, the valves will be removed, as it is easier to do so while they are hot, and full winter maintenance will start on the following Tuesday. 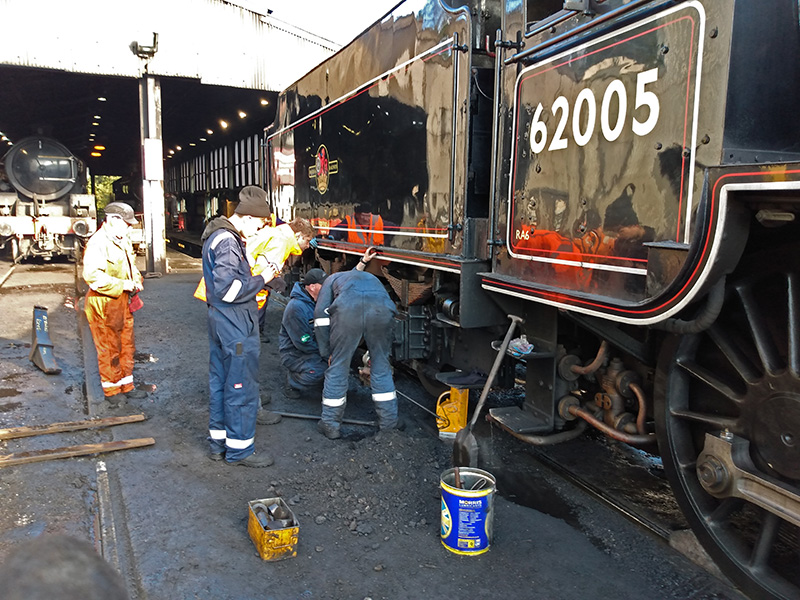 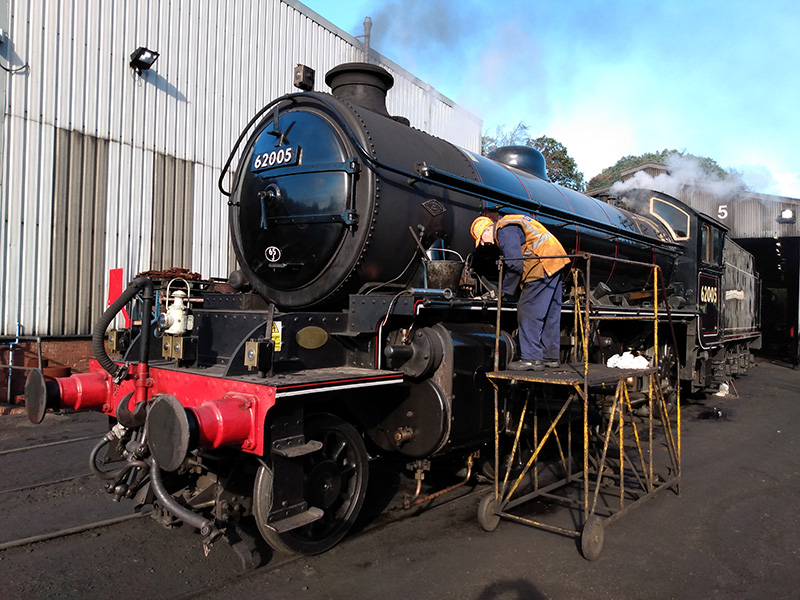 Lunch was had alfresco in the by now warm sun, on the benches outside Deviation Shed. Afterwards we set about clearing scrap and rubbish from No 8 Road and the back of the building. A heap of scrap has now been collected on the east side of Deviation Shed. A lot of fire bars have been stacked on a pallet which will need sorting. Then we will need to borrow the Railway's flatbed and take everything to the scrap yard at Marske-By-The-Sea. Having cleared the way, Chris Cubitt and Charlie Wood then shunted the J27 into No 8 Road to get it under cover. It still requires a boiler washout which is now due to be done in November, before its duties on the Santas and Northern Lights trains.

Meanwhile, the expanding and beading over of the leaking tubes on the T2/Q6 was completed. The cause is still being investigated by the MPD, but thought to be either being lit up too quickly in the morning, or cooled down too quickly in the evening, ie heat stress. The boiler was partly filled and a warming fire lit late in the afternoon for a steam test today. Subject to that being successful, the brick arch will be rebuilt and a loaded test run carried out before the locomotive is retired for the season, moved into Deviation Shed, and winter maintenance started.

S15 No 825, which in the evening ran to Battersby and regained its mainline certificate, meaning it can now work to Whitby - congratulations to William Parrish, Martin Ashburner and the rest of the S15 team.