'The rain it poored doon aall the day and made the groond quite muddy' at Grosmont yesterday, as the famous song says. Ian Pearson, Steve Hyman, Nigel Bill, Jon Bradley and myself (working on the T2) and Paul Hutchinson, Angie Buxton, Les Harper and Mike Bloomfield (working on the K1) all braved the appalling weather to get to Deviation Shed. At the start of the day the stove was lit and tea brewed. 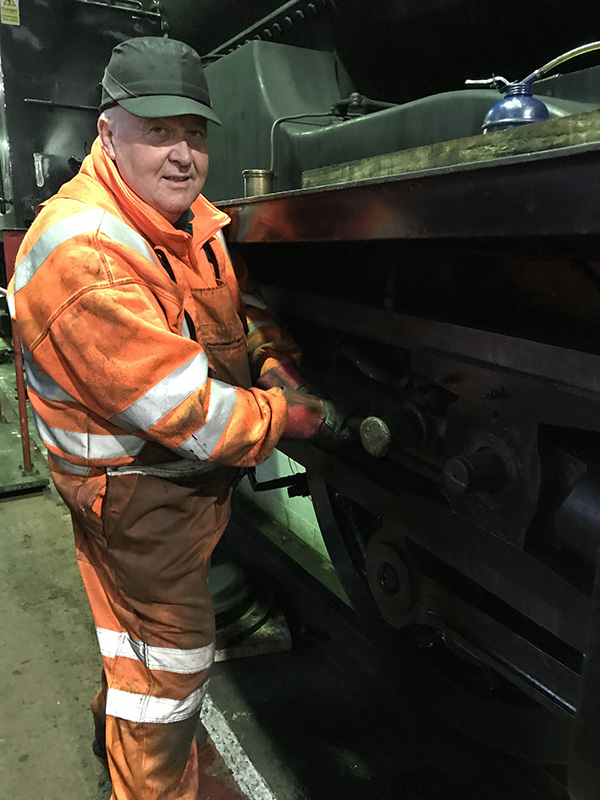 On the T2, work started, mainly with a team effort, which saw the LH crosshead oil pot removed,and then both crosshead cotters removed with hammer and a bar. A tool had been borrowed from Ian Storey for removing cotters but it was too large and would not fit. All the locomotive brake blocks were removed and have been stored under the bench by the display boards. I also replaced all the broken bulbs in the inspection lamps, and the remaining new bulbs are on the electrical spares shelf in the storeroom upstairs. Lunch was had around the stove and discussion of how we were to split the crossheads. Having decided on a plan, all the splitting equipment was brought up from the MPD. During the afternoon both crossheads were split from the piston rod - see photo of a pleased Nigel after he had given the crosshead a thump with a copper hammer. With pressure on from the splitter the rod parted with a bang (see photo of end result with the splitter attached to the crosshead). While work was underway on the crosshead I was busy cleaning sections of the spark arrestor. The L/H side metal piston packing was also removed, put in a box with its nuts, and put in the storeroom upstairs. This piston is now ready for removal at the weekend. 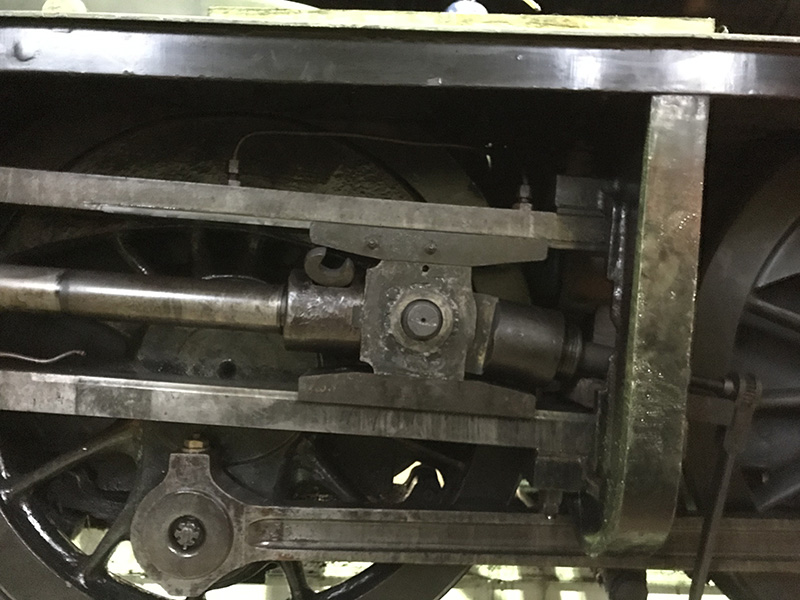 Meanwhile on the K1, the team completed servicing of the cylinder relief valves, replaced the left rear ash pan door linkage pin, progressed the annual backhead valve exam and maintenance (including recutting both clack box steam valve seats), previously weld repaired areas of the tender tank were re-welded by Mark O'Brien after he had finished work, a new taper pin prepared for the LH return crank, the steam heat valve bead blasted (the valve seat is to be replaced by Steve Andrews), and the LH cylinder sealing face and cover studs cleaned ahead of reassembly. 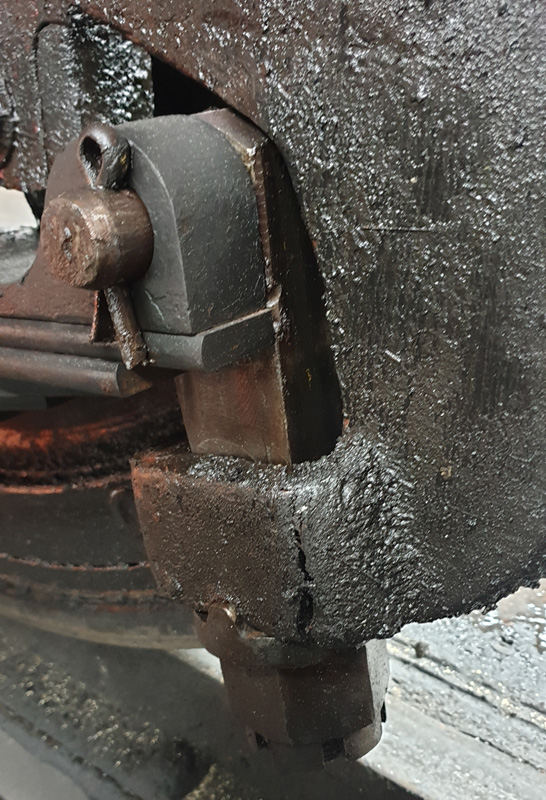 Not such good news on the J27 however. After refitting the valve covers on 21 November, during the subsequent fitter's inspection, the left leading driving spring hanger bracket was found to be fractured (see photo). It was decided to machine a new part (the half with the pocket for the spring hanger bolt) and weld it onto the half that bolts onto the frames. Evidence was found of a previous welding repair though and the fractures in the old casting are many and substantial. A new lower part is therefore required. The fractures appear to have been there before the leaf spring collapse, but this collapse will have hastened this latest failure of the casting. Time is of the essence to get the engine ready for the Santas. The necessary steel has been ordered and, once it arrives, the MPD has said that the necessary work to effect the repair should only take a few days. The J27 will therefore miss the trial run of the Northern Lights Express tomorrow and will be replaced by the B1 No 1264. Once the repair is completed however, it is expected to be used on the remaining Northern Light Express and the Santa Special trains to the end of December. Being based at Pickering it can also provide steam heating for the duration. The MPD’s Barney Casey will be keeping an eye on it while it is there, and making sure it is not affected by any bad weather that might occur.

In spite of being no operations yesterday, the S15 was on test in steam, the B1 was moving around festooned in LED light strings, and the 9F and Repton were lit up late afternoon. The Channel 5 film crew were also around, including in Deviation Shed, no doubt getting the atmospheric dusk/dark, raining and steam swirling shots.