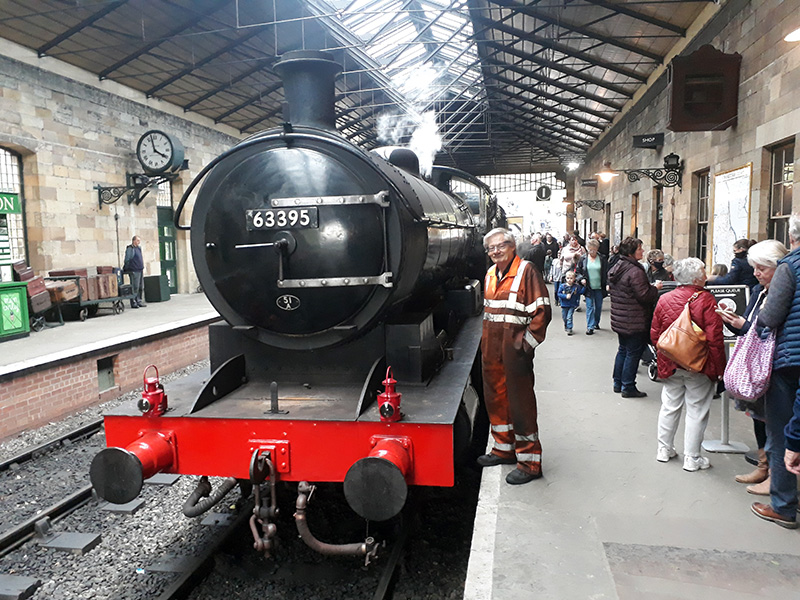 The Q6 is finally back in revenue earning service, so many thanks to Bill and Ian Pearson in particular, but also to everyone else who has been involved over the past two years, for all their hard work in overcoming frustrating setbacks and problems, culminating in the successful arrival at Pickering on the Thursday of 63395 with the 14.30 departure from Grosmont.

During the final assembly of the locomotive one of the cylinder cover studs was not as tight as it should have been on the casting. On steaming, hairline cracks were noticed around an old metal stitching repair. A new repair was effected, and a stepped stud fitted in the offending location. The mating surface was not flat, so it was arranged that an on-site machining company should skim the front face of the cylinder casting. This also cured a long standing issue whereby the cylinder liner was not flush with the casting.

A fine day at Grosmont and, along with Bill, Ed Bolam and Ian, were two engineers from Team Industrial Services who had come to skim the righthand cylinder face. This job was completed by mid afternoon, but it was a bit late to start refitting the studs and cover, so it was agreed to come in on Monday to fit the cover. 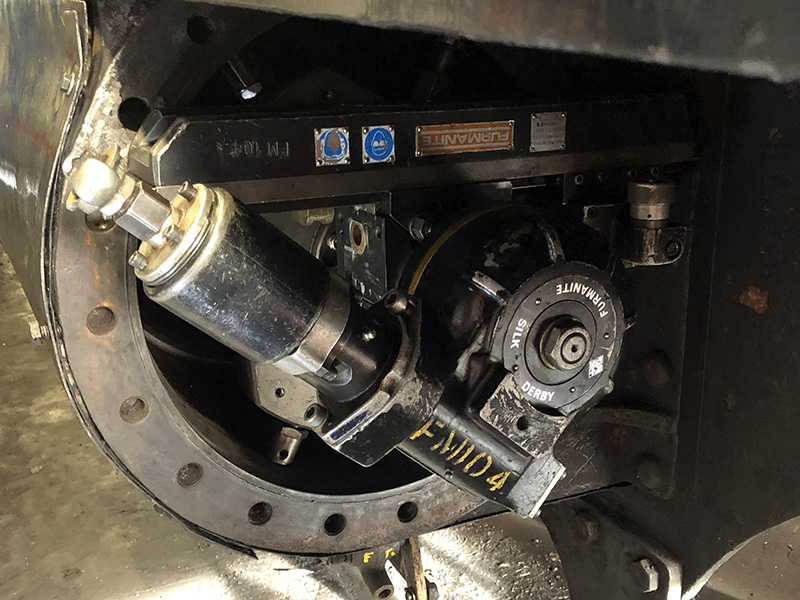 A movie by Ed Bolam showing the machine in action can be seen here. 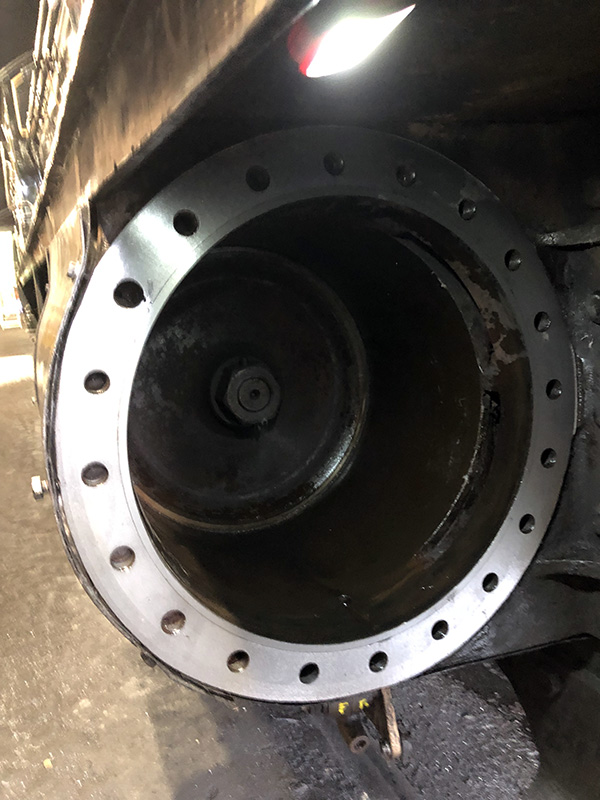 Monday dawned a fine day at Grosmont, with a couple of heavy showers at lunchtime for Bill Dobson, Ian MacCall and Ian Pearson to dodge. The first job was to fit the 20 studs back into the cylinder face, but also to remove the lubricator drive and big end brasses from con rod in readiness for a bump test later.

After the studs had been fitted, the cover was put in position on the lifting table and pushed onto the studs with some of the nuts applied. It was then found that it would not fit snugly, so the cover was removed. The stepped stud that was fitted last week looked slightly out of line with the others. As a result, the hole in the cover that it fits on was slightly enlarged with the die grinder and the cover refitted. But it still would not fit in against the cylinder face. So, the cover was removed again, and fitting was tried without the copper ring. No luck! It still would not fit, so the cover was removed once more. Bill ground round the tapered area of the inside of the cover that fits into the cylinder and then another fitting was tried. This time it was a lot better but still not good enough. After consulting Sean Bowler, he suggested putting the cover on the vertical borer to skim off a few thou. As it was 6pm, this was decided to be a job for Tuesday morning, the cover was taken off again, put on the lifting table, and taken to the machine shop ready for machining the next day. 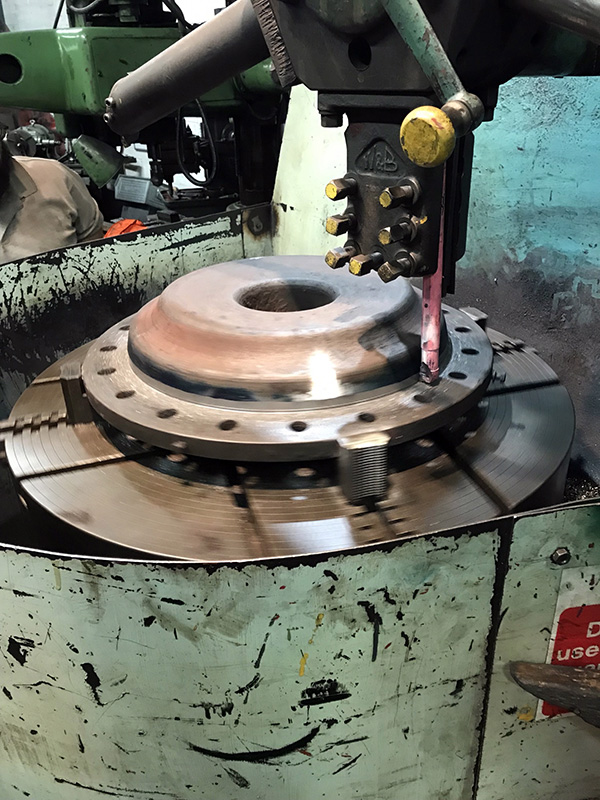 Today's volunteers were Bill Dobson, Steve Hyman and Ian Pearson, and the first job was to take a slight amount off the copper ring which was slightly overlapping the entrance of the cylinder bore on the left side. This was done with a flapper wheel by Sean Bowler. Then, down in the machine shop, the cylinder cover was set up on the vertical borer and skimmed, taking off about 20 thou (see photo). It was then refitted successfully and tightened up with Bill using a torque wrench to the required amount. After the cover was fitted, a bump test was carried out successfully and the big end brasses refitted and secured with some help and assistance from Chris Cubitt. The warming fire, which was set on Monday, was lit during the afternoon. Other work done was making and fitting of a plywood cover over the driver’s side sand box.

Bill and Ed Bolam on duty. The Q6 was in steam, and with Charlie Wood driving and Andrew Jeffery firing, the Q6 did a couple of successful running in trips to Goathland (see photos). 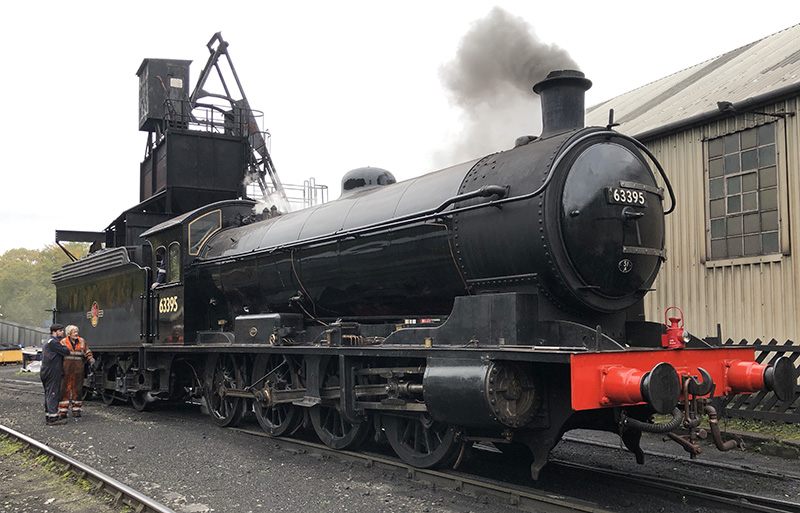 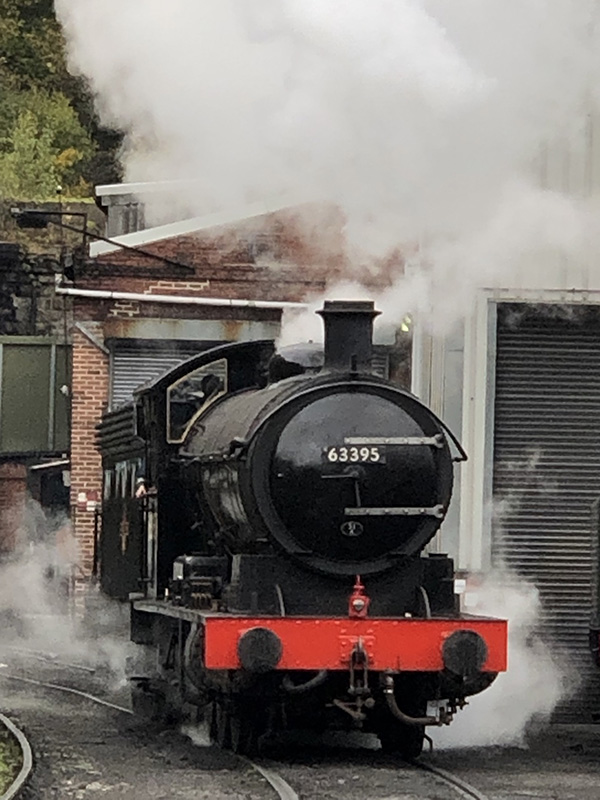 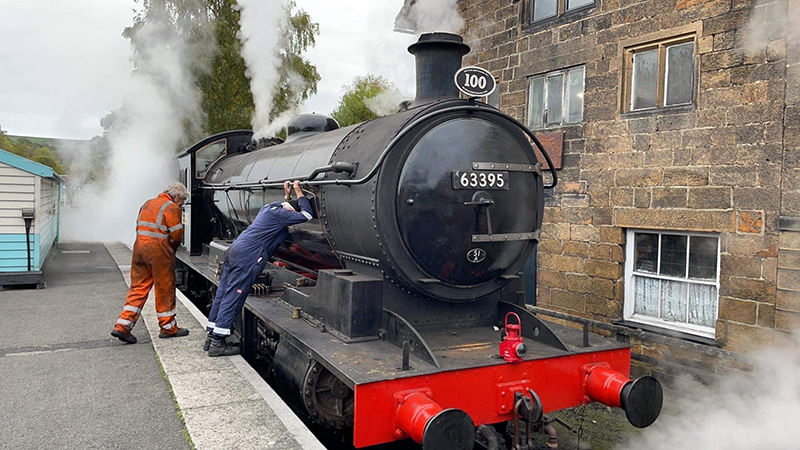 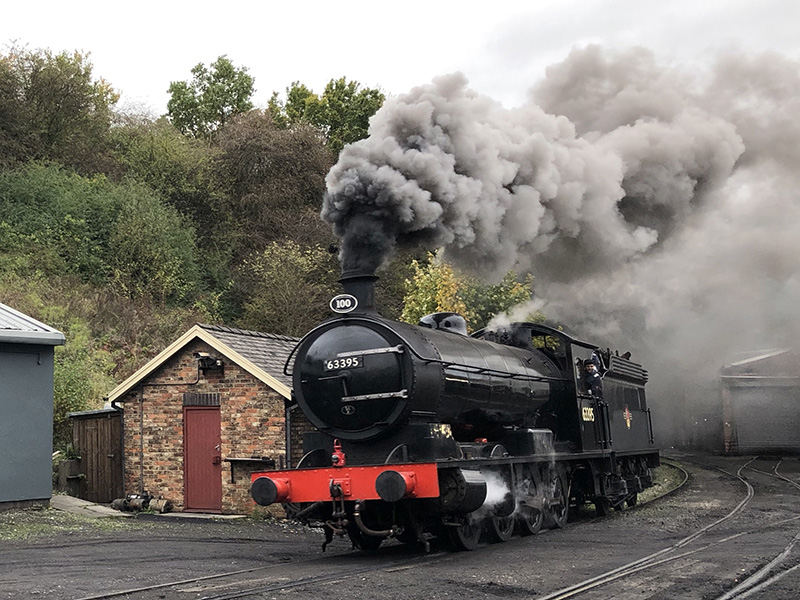 Thursday was a fine windy day with the Q6 in steam again, with Bill in attendance and driver Robson Hewitson and fireman Graham Hartley. It did two more running in trips to Goathland light engine with no problems, and then worked the five coach 14.30 return to Pickering from Grosmont (see photo) and was relieved on its return to Grosmont by the Class 20, Sir John Betjeman, to take the train on to Whitby. The engine performed well, with only the lefthand big end slightly warmer than the righthand one. The lefthand big end is on the list to be adjusted. 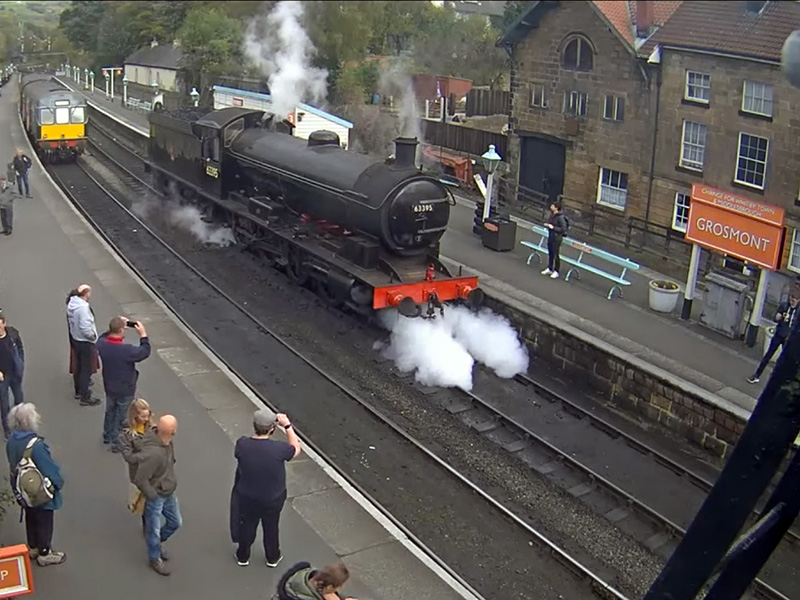 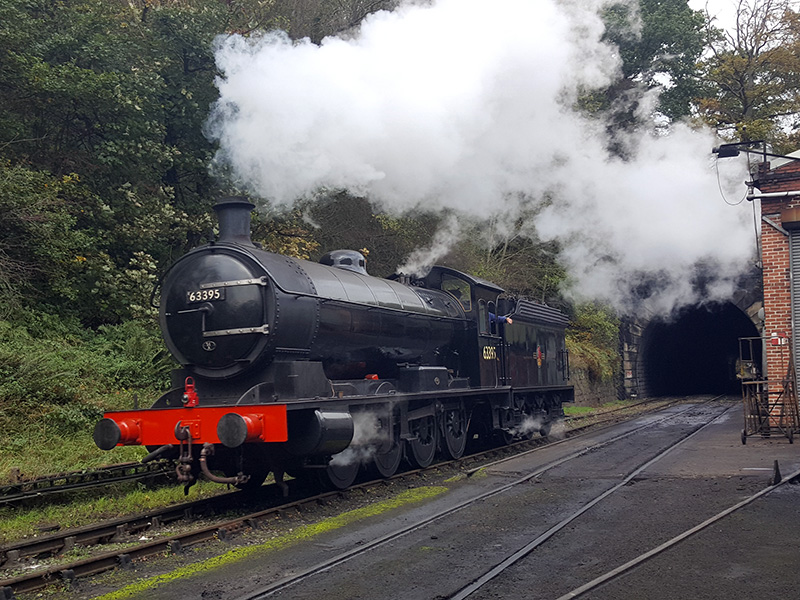 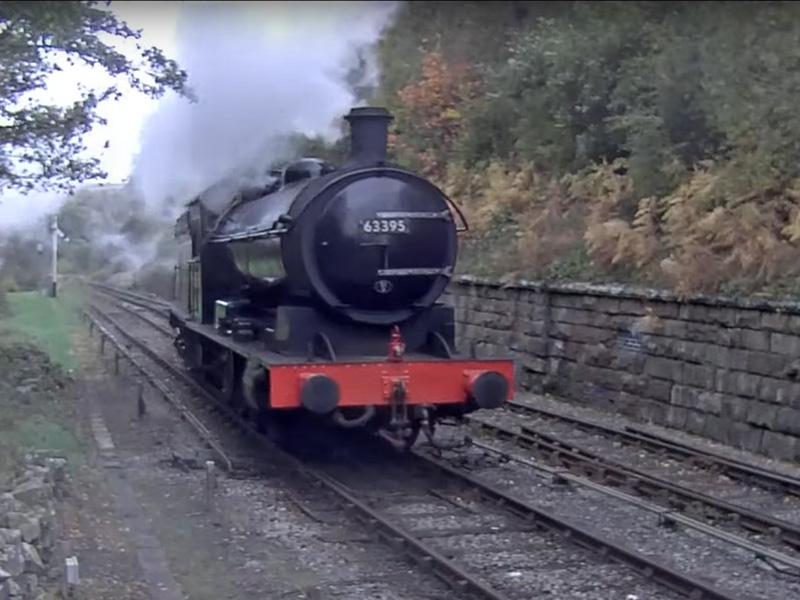 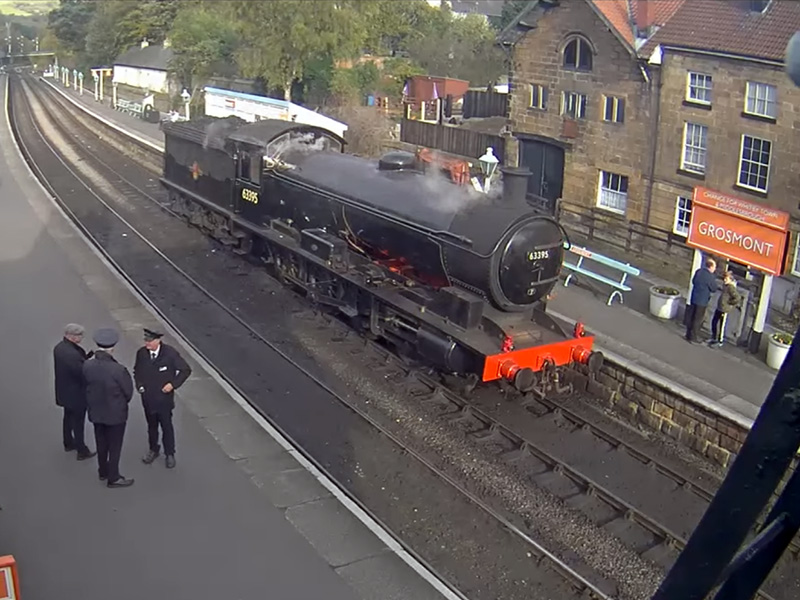 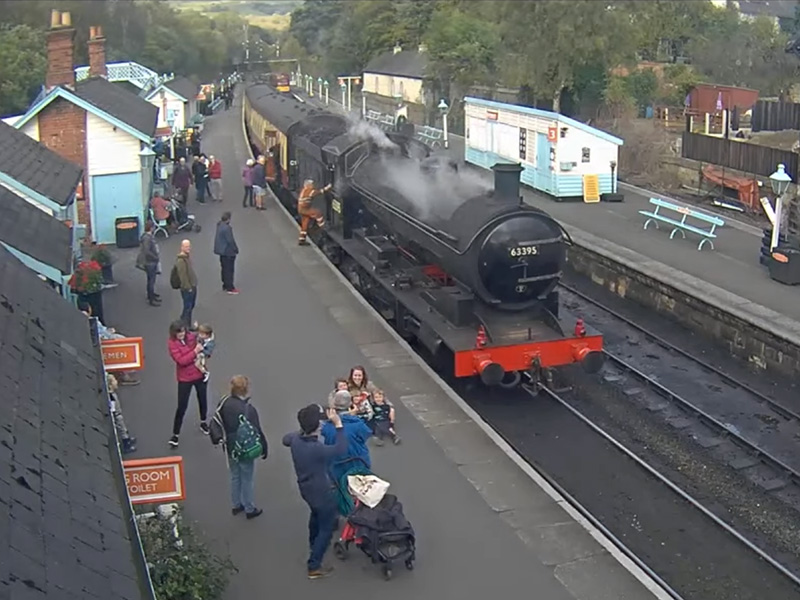 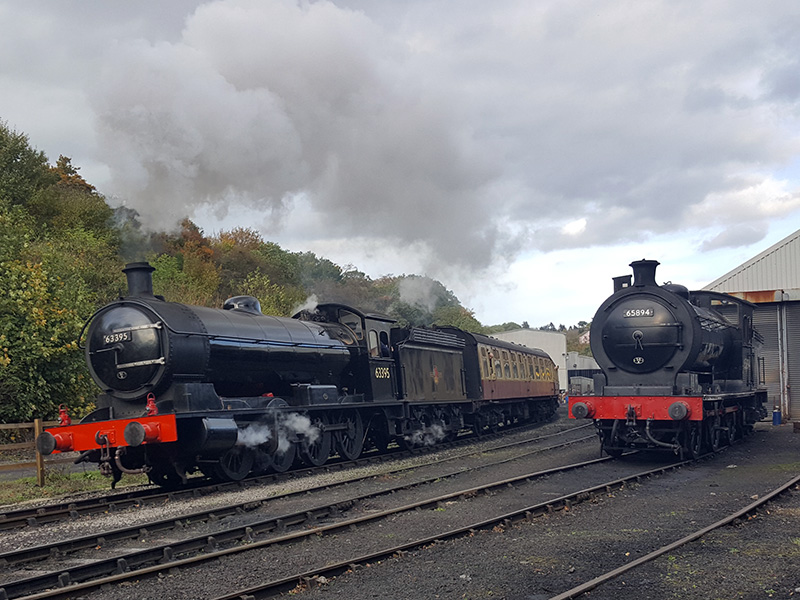 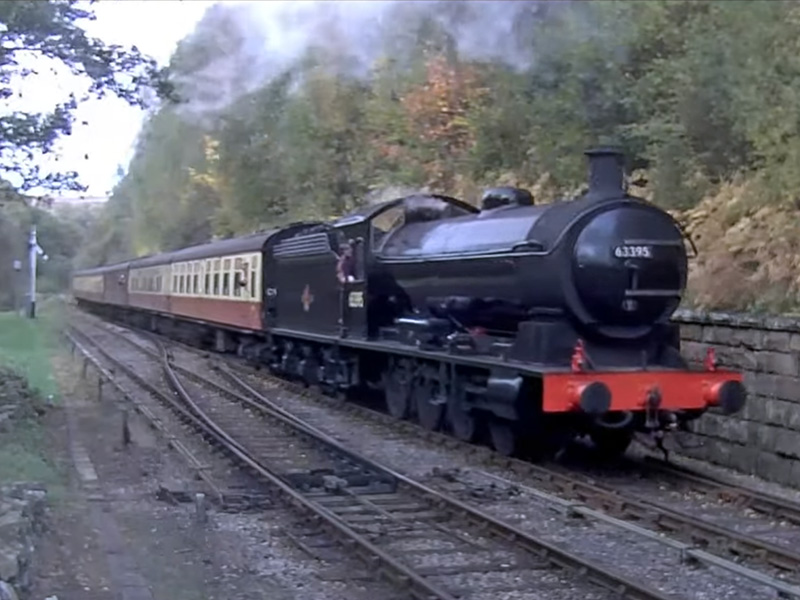 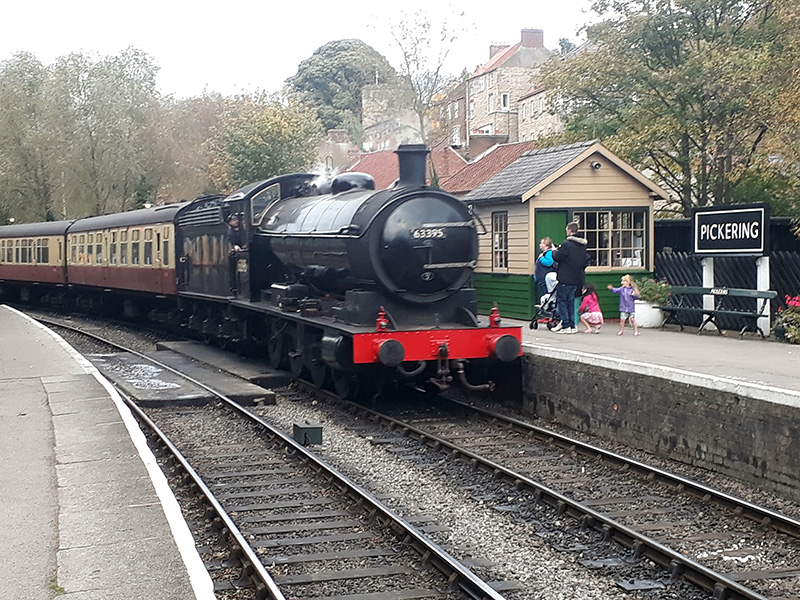 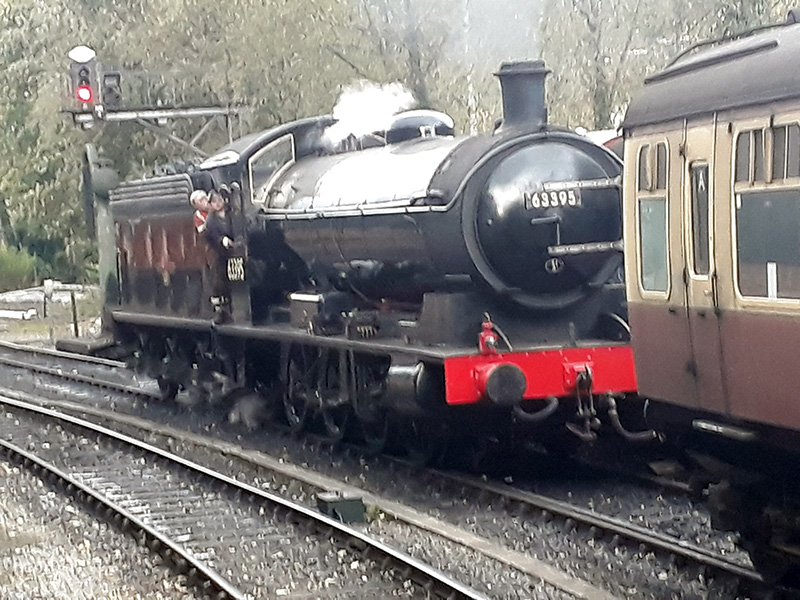 The Q6 is now back in service.

Many thanks to all those, both NELPG and NYMR, who have worked so hard over the last two years to make this possible.