K1 out of traffic

K1 out of traffic

The K1 was withdrawn from traffic on return to the Fort William depot on Tuesday evening, 22nd September.

The symptoms were an unusual beat and a general loss of power. Both piston valves have been removed and examined on Wednesday, but no explanation for the symptoms found. The cross head splitting gear was taken from Hopetown to Ft William on Thursday to enable the pistons to be removed.

On Friday the left hand piston was removed and the piston rings found to be fixed solid in the piston. There was also a lot of carbon present. It is not thought that the rings can be removed without them breaking. It is believed that this is the cause of the loss of power and the off beat, but can't be 100% sure.

The plan for Saturday is to take out the right hand piston to see if it is in the same condition or is OK. There are some spare rings in the Support Coach, so they will be measured up and hopefully fitted so that everything can be put back together by the end of the day and allow people to get back home after what has turned into a very long week.

Whether any further work will be required before the next rostered week beginning 5 October depends on the outcome of tomorrow's activity.

After a loaded test run to Spean Bridge on Sunday October 4th, the K1 was pronounced fit for service and commenced working the Jacobite again on Monday 5th. The locomotive has performed flawlessly on Monday and Tuesday. Let's hope continues to do so. 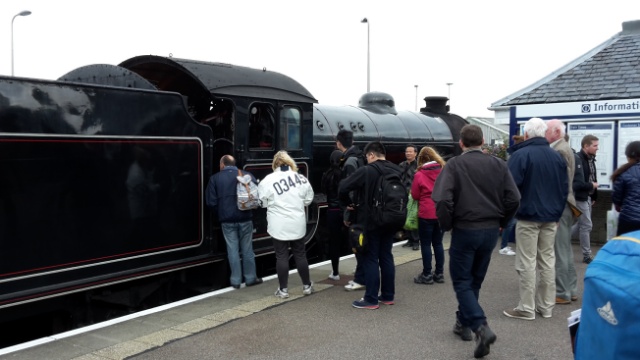